Catholic sisters have long been at the forefront of identifying and serving unmet community needs. Their call and devotion to people – especially the most vulnerable – is deeply felt and known.

But Catholic sisters face critical questions about the future of their ministries: How can we continue our good work together? What greater impact might result from uniting individual congregations’ efforts? How can we be sure the legacy and service of women religious continues as we recognize our community’s dire needs?

Those are the critical issues that the Collaboration for Ministry Initiative (CMI) was formed to work on in 2002 as an initiative of the Sisters of Charity Foundation. Its mission is to grow alliances among women religious and envision a plan to sustain their ministries through convenings, communications, research and grantmaking.

Catholic sisters have an average age in the mid- to late 70s, and many have dedicated 40-plus years to their congregations.

“There was a growing sense of isolation among sisters who are in ministry because their age is rising, and they’re doing more with less,” explains Erin McIntyre, SOCF’s current program officer for religious communities. “Their resources are decreasing, while the human and financial need for their services is increasing.”

SOCF’s support of Catholic sisters and their ministries has also made possible programs like bringing the national exhibit Women & Spirit: Catholic Sisters in America to Northeast Ohio in 2010 to Cleveland.

Now the focus of CMI’s work is to foster intergenerational collaboration, connecting women religious with young adults committed to social justice and those living at the margin.

“We want to share the prophetic mantle of Catholic women religious and not only why they do their work, but how they do their work,” McIntyre says. “There are people who have a desire to live out the Gospel message, perhaps not as a consecrated person, but to understand their work as a ministry — more as a vocation. We’re looking at building strong relationships between laypeople and Catholic sisters.” 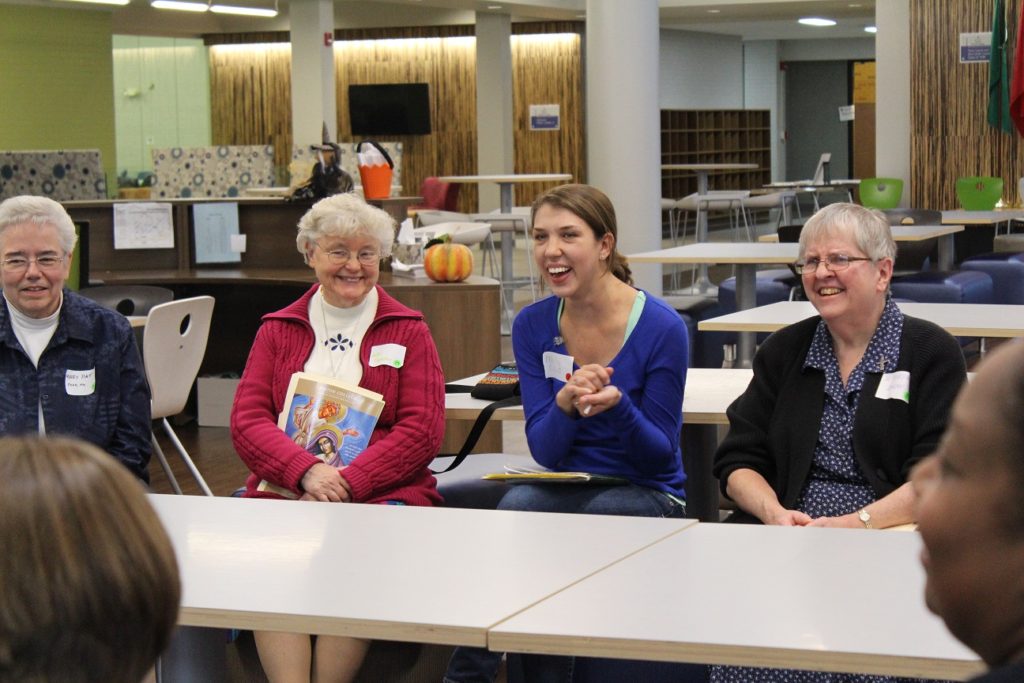 Human trafficking was not an area of ministry for Sister Anne Victory HM and her fellow Catholic sisters until they attended a conference on the subject about 10 years ago.

“We were shocked,” she says. “We thought, ‘We better do something about it.’ But, we didn’t know what that would be. We decided to meet until we figured it out.”

That conference spurred these women to start the Collaborative to End Human Trafficking in 2007, which today leads Northeast Ohio’s response to human trafficking as a coordinated effort among law enforcement, health care, social service, business organizations and religious groups. Its mission is to educate and advocate for the prevention and abolition of human trafficking while connecting services to those who are impacted, with financial support from SOCF.

“A lot has happened in the nine years since we have been focused on this,” Sister Anne reflects. “We have a strong network in the Cleveland area.”

In 2011, the group commissioned a feasibility study, interviewing 30 different organizations asking, “How many victims of human trafficking are you seeing?” Sister Anne says the query was met with blank stares. “That was the first clue they didn’t know anything about it.”

It created an awareness and response campaign during the 2016 Republican National Convention, and created a protocol that all four major health systems in Northeast Ohio follow in dealing with victims of human trafficking. To date, the collaborative has presented about 1,900 programs to such audiences as schools, hospitals, churches, social service agencies and businesses, reaching more than 80,000 people. The video it developed is now being used nationwide. But, says Sister Anne, “that’s not enough.” Greater awareness of this reality continues to be an important priority.

With SOCF as a partner, Sister Carol Dikovitsky SND says, “We can do things together that we could not do separately.”

That includes organizing symposiums and speaker series, including several featured throughout the Pope’s Year of Consecrated Life in 2015.

CORL and SOCF also work collaboratively on longterm projects, such as the Collinwood Neighborhood Catholic Ministries, which is there to listen, learn and respond to unmet needs in the community, says Sister Carol.

It offers programs such as a cancer survivors group for women, prayer shawl ministry, cooking with kids and a teen girls group. It also offers counseling for children, teens, adults and seniors.

“Now, we also have a grant to further collaboration between Catholic sisters and young adults,” Sister Carol says.

Grants from SOCF allow CORL to take on projects it could not do independently, she says.

“The foundation has been a wonderful support that is committed to furthering the mission of Catholic sisters,” Sister Carol says.

years of continued support of the Collaboration for Ministry Initiative