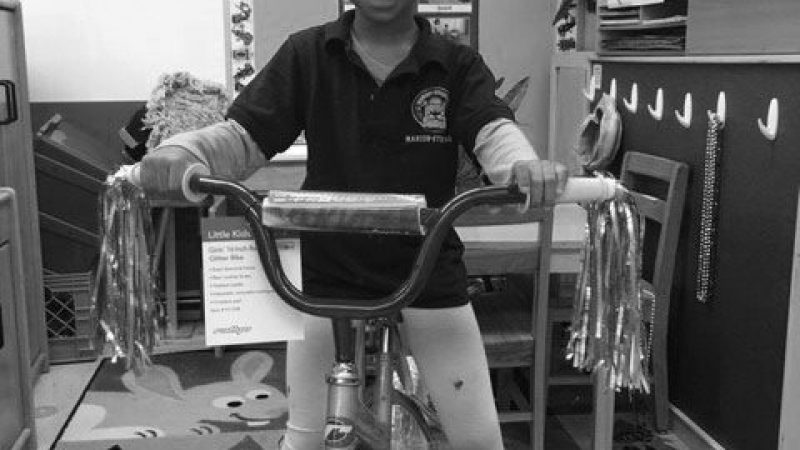 “It was awesome to see the growth of Frederick and Diamond during the program,” said Maria Schulenberg, preschool teacher at Marion-Sterling Elementary of the school’s Read and Ride winners.

Cleveland Central Promise Neighborhood envisions that every child is ready for kindergarten and that every third grader reads at third grade level. The preschool Read and Ride program is a fun, family-oriented activity that supports families in reinforcing reading at home.

“Deon’tae winning this bike is truly a blessing,” said Antoinette Pratt, grandmother of William Patrick Day winner Deon’tae Pratt. “With summer coming I’ve been wanting to get bikes for the kids, especially Deon’tae because he outgrew his old bike.”

Pratt used a number of community resources to get books for her and Deon’tae to read. She went to the library, received books from Help Me Grow and took advantage of the books provided by the Read and Ride program.

Cleveland Central Promise Neighborhood hosted the Read and Ride program for early learning centers through a partnership with Starting Point and Kids Book Bank. The contest was held at seven Step Up to Quality rated early childcare learning centers located in the Central neighborhood. Families with children enrolled in these programs were eligible to win a bicycle if they read at least three books with their child. For each additional book read, the child’s name was placed in the drawing for the bicycle.

The Read and Ride program began at George Washington Carver Elementary in 2015 and is now held at all Cleveland Metropolitan School District elementary schools in the Promise Neighborhood. Read and Ride has been successful in motivating first and second grade students to expand their reading, so in 2017, Cleveland Central Promise Neighborhood staff decided to expand the program to early learners.

Early learning and child care centers prepare children to transition to kindergarten. According to research, children who attend high-quality preschool enter kindergarten with better pre-reading skills, richer vocabularies, and stronger basic math skills than those who do not. Programs like Read and Ride can help improve a child’s vocabulary and increase their confidence. Children who read better tend to do better across all school subjects.

“The teachers at Marion-Sterling told me that Frederick was unable to recognize letters and having trouble sounding out letters. I worked with him every day to help him and after a while he got better and even asked to read on his own. He would tell me to let him read on his own and would return to school telling his teachers he read all his books on his own,” said Desharay Riley, mother of Frederick Grair. “It makes me feel good that he is improving and that I’m not just sending my kid to school and letting them do all the work, that I am helping my child. Marion-Sterling is a very good program and Ms. Schulenberg and Ms. Eileen are the best teachers. The Read and Ride program encouraged me and my son to keep reading.”